TRUSSVILLE – On Monday, April 25, Trussville Fire and Rescue Station 1 received a custom kitchen table built by Mike Pender, who several firefighters know, and wanted to do something special for the department.

“I had the honor of building a dining table for the Trussville Fire Department (TFD),” Pender said. “When Lt. Brandon Jones and Chief Chris Schmohl asked me if I would build a table for them, they pointed out how sacred the fire station table was to firefighters.”

According to Fire Engineering, there is no more sacred place in a fire station than the kitchen table. The average firefighter will spend about a third or more of their life at the firehouse working with a team of other professionals with the same common goal of accomplishing the mission, serving the community, being there, ready to leave when the bell rings, and do their best for those who enable them to serve in such an important career within the fire service.

It’s here at the hallowed table where departmental issues are resolved and the crew eat their meals, a place to get to know the crew, just have fun while waiting for the bell to ring, or take care of numerous assigned duties such as firefighter training, company fire prevention inspections, hydrant maintenance and public education sessions. This second family consists of those with whom we are fortunate enough to serve on every shift for 12 hours, 24 hours, 48 ​​hours, whatever the duration.

“The only criteria was that the table had to be a 9′ x 4′,” Pender said. “They also requested that all four units be represented as well, including Battalion 1, Rescue 1, Engine 1 and Ladder 1. The wooden handles were removed from the four fire axes, and I used a blacksmith to make metal handles to support the table.” 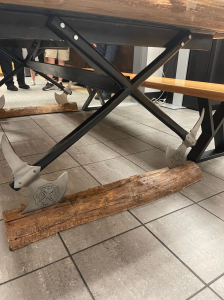 According to Pender, the table and benches used over 15 gallons of an epoxy finish. The Maltese cross in the center of the table, with flames, and the four fire axes supporting the table came as a total surprise to TFD.

“The table was crafted from northern Pennsylvania red oak,” Pender added. “The wood in the north grows much slower and has a tighter grain, which makes it a better wood.”

“He did an amazing job and we really appreciate that,” said TFD chief Tim Shotts. “The design of this table, down to the legs made with an ax, is extraordinary.”

The Trussville Fire & Rescue surprised Pender with the presentation of a custom fireman’s ax to show their appreciation.

“Chris Schmohl handed me hooks and said they appreciated the table, and that was in case I wanted to hang up anything,” Pender said. ” I did not know what to say. Then Brandon Jones stepped in and handed me the fire axe. He repeated to me how important and sacred the barracks table was for firefighters.