It’s been a crazy year for everyone, and one of New Orleans’ mainstays – the restaurant industry – has had a particularly hard time staying open and profitable during the changing phases of life during COVID. Latter Hospitality Group’s hybrid Claret / Bower concept menus in the Lower Garden District don’t hesitate to say, “We are grateful to see you! In our unprecedented climate, we offer select dishes from Claret and Bower. Hey, when life gives you lemons… We’re thrilled to have this opportunity, offering articles of both concepts under one roof. From the bottom of our hearts, we thank you for your continued support, patience, understanding and kindness. “

Claret opened in the Development Framework on Magazine Street – which is also home to Dirty Coast, Krewe and MVMT by Romney, to name a few of their business neighbors – in May 2019 as a wine bar. and cocktails, with a few small plates on the menu and, in particular, a spacious patio. The Bower opened as a full-service restaurant in the Framework space adjacent to Claret for three days in March 2020 before… well, you know. The proximity of the two properties allowed management to be creative and flexible when the rules changed overnight regarding the licenses required to remain open for business.

Claret has apparently remained closed to operate the entire business on Bower’s restaurant license, but the new operation has always been able to benefit from Claret’s patio, wine list and reputation during its year of operation. pre-pandemic activity.

“With our current setup, we’re aiming to attract those who just want a cheese board with friends, those who want a three-course dinner and everything in between,” said Nancy McDaniel, Director of Marketing. “It has been really nice to see how we can meet different needs and wants under one roof. “

The arrangement now allows the Bower to make a name for itself, and some elements of the Bower concept remain unchanged even in this year of so many changes. Namely, owner Mark Latter and chef Marcus Woodham were interested in creating a very local menu that put vegetables at the forefront as a tribute to the origins of the neighborhood (it’s not for nothing it’s called Garden District!).

A sweet partnership with a local farm

An ‘arbor’ is a trellis walkway that was common in 19th-century gardens, and indeed, greenery cascades from suspended beams throughout the restaurant to successfully evoke such an image. During my interview with Last in July regarding closing and [still not-quite-complete] Tujague move, the original asset and jewel in the crown of the empire, he proudly told me: “Chief Marcus will make you want to eat vegetables, even if you are not a vegetarian! (We were interviewing at the Bower and I couldn’t help but ask a few questions about the surroundings.)

These vegetables, as much as possible, come from a beloved little West Bank farm called Sugar Roots Farm, which I had the pleasure of visiting on a scenic October day. Executive Director Brooke Bullock gave me most of a visit before handing over the reins to vegetable farmer Leila Rezvani, when she had to rush out to buy horse feed (you know, stuff farm). What started as a petting zoo with a small vegetable patch has evolved into a larger scale and incredibly sustainable farm under Bullock’s leadership. She and Rezvani have a wealth of agricultural knowledge between them and have enjoyed using all the biodynamic weapons in their figurative arsenal to face the challenges presented by the land of Louisiana.

On the one hand, the soil here is very clayey and its nutrients are largely inaccessible to many plants. So the first step is to build a sturdy floor, which is a long process that involves a lot of waiting and a bit of trial and error.

They don’t use artificial fertilizers or pesticides, but enrich the soil with the compost they grow and manure from farm animals. Then they plant cover crops, which help give them a sense of what will grow well, and which eventually tip over to continue to strengthen the soil. Of course, everything is extremely seasonal.

In July, Latter released ingredients like purple okra and peppers that the farm supplied to the restaurant. In October, the beds featured leafy greens, radishes and a superb harvest of roselle hibiscus. Bullock and Rezvani both seemed excited about the milky oats showing promise in the current cover crop, and expect it to be a big part of the next rotation.

Moisture can also be a problem. Rezvani told me that they were lucky that October was a bit dry because the ground holds so much moisture and (surprise!) Can be prone to flooding. They are reluctant to radically alter the area’s natural drainage pattern, so they have to experiment with raised beds and minor irrigation works. 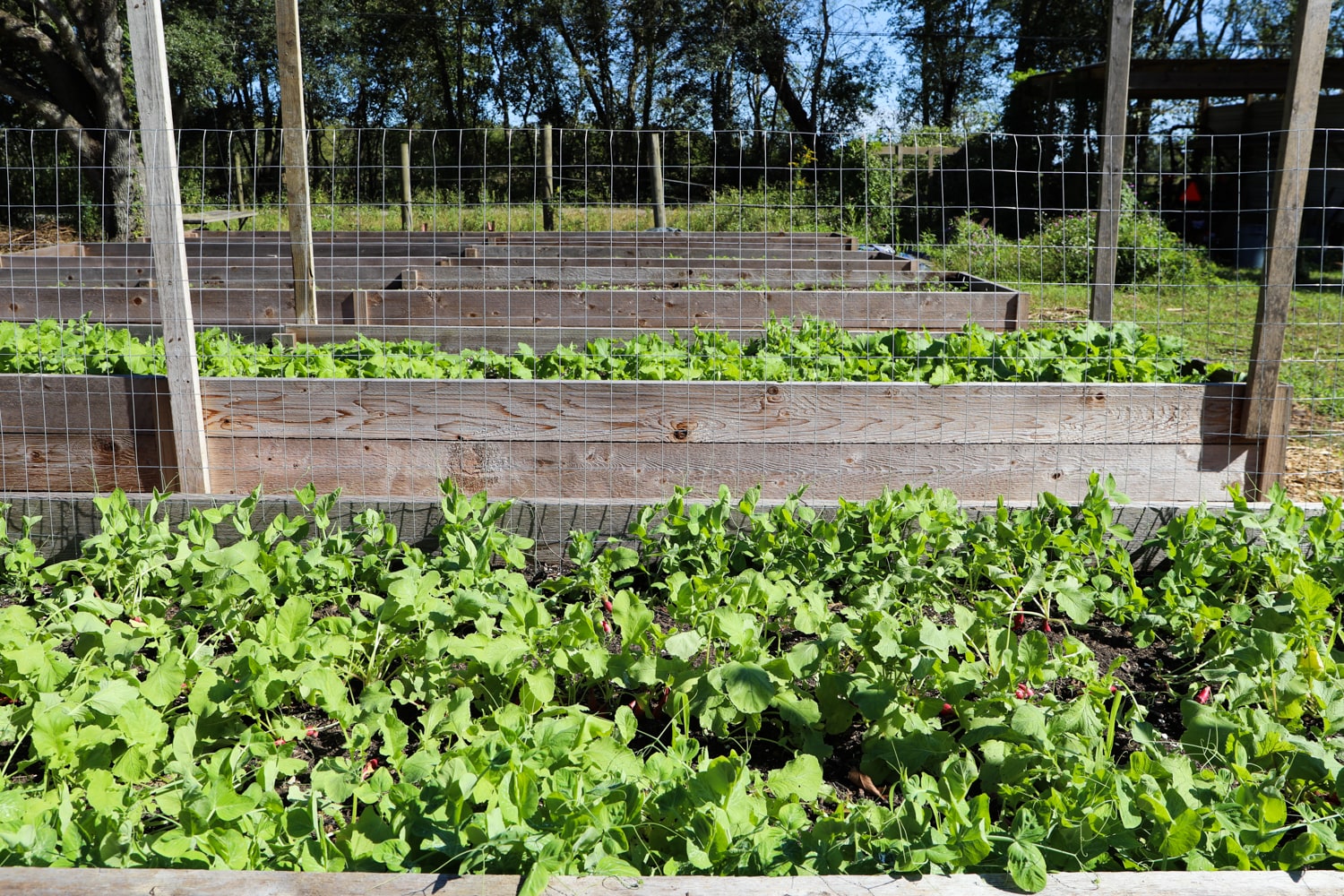 And of course, it wouldn’t be a good Louisiana story not to mention the alligators: the farm only has one duck, and while they can’t say for sure where the others have gone, the alligators are among the main suspects. (Fortunately, the farm’s loyal horses, cows, pigs, llamas, goats, chickens, and dogs have avoided any confrontation with predators.)

Around the time Bullock took over as CEO of Sugar Roots, Felicity Property Management purchased the land on which the farm is operated. Felicity also owns and manages the development of Framework which houses Bower and Claret.

When Bullock expressed his desire to enter into a catering partnership with Kendall Winingder, one of Felicity’s founders, it didn’t take long to connect the dots at the Bower. “It kind of just happened,” Bullock said. Now Chef Marcus visits the farm every now and then to assess what’s coming up and inform his menus, and the staff at Sugar Roots regularly provide him with some of the freshest produce in New Orleans. 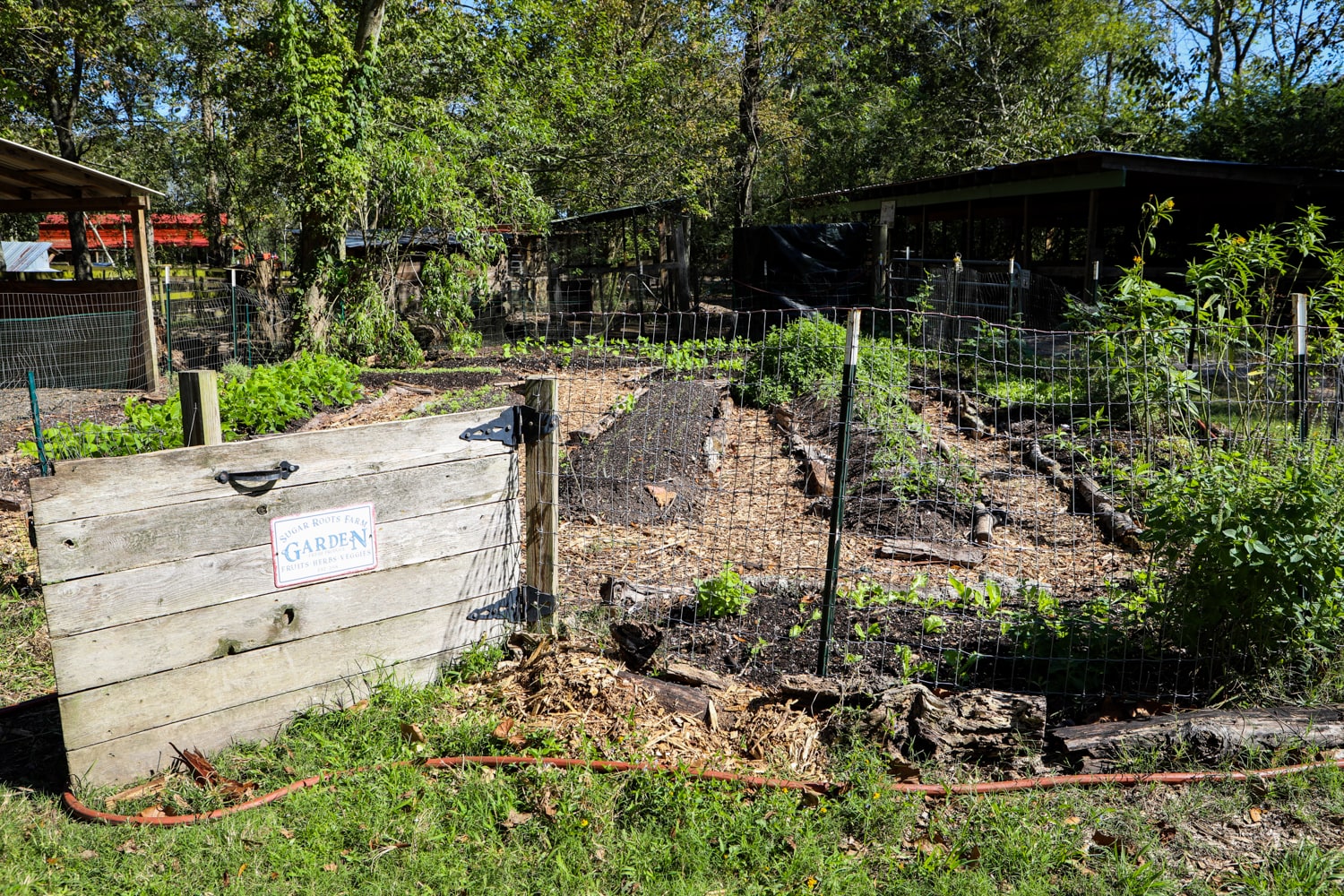 “The other week we sent a batch of rocket that we had harvested literally an hour before,” Rezvani informed me.

This arugula is now featured in the pesto that adorns the gulf fish on Bower’s current menu. Sugar Roots cabbage and mustard greens are served with pork chop, their radishes and turnips appear on the plate of homemade pickles, and these pretty roselle hibiscus blossoms make a gorgeous addition to the LGD cocktail. It’s exciting to imagine how this partnership will develop as Sugar Roots continues to take root and expand its offering of super local and super sustainable products.

Sugar Roots Farm is located at 10701 Willow Dr. Visit their website for more information on touring the farm or to book one of their educational classes on topics such as gardening, composting and raising chickens.