Ganesh Chaturti is celebrated with great fervor in Hyderabad. While idol-dipping processions, community pujas and temple visits take center stage, the culinary sphere is often limited to modaks, basundi and Pooran polis. However, this time we are exploring a range of authentic flavors from Ganesh Chaturti during our stopover at Gaurang’s Kitchen. The 300-seat ethnic restaurant, the brainchild of renowned Hyderabad designer Gaurang Shah, offered us South, Deccan and West Indian vegetarian dishes served on specially selected 22-course thali.

We entered the restaurant for lunch, passing the vast baithak space adorned with Indigo looms swaying in the breeze. We were seated in the bungalow area of ​​the house which had beautiful ethnic decor inspired by weavings from Gaurang’s workshop. Of brilliant paithani, kanjeevaram and benarasi from the weaves adorning the vintage glass panel walls to the translucent white curtains and checkered tablecloths, we’re told all of the upholstery fabrics were created from the looms the designer works offshore.

Before ordering the Ganesha thali festival we were served detox water made with soaked cucumber, mint leaves and lemon which rejuvenated us on a summer afternoon. 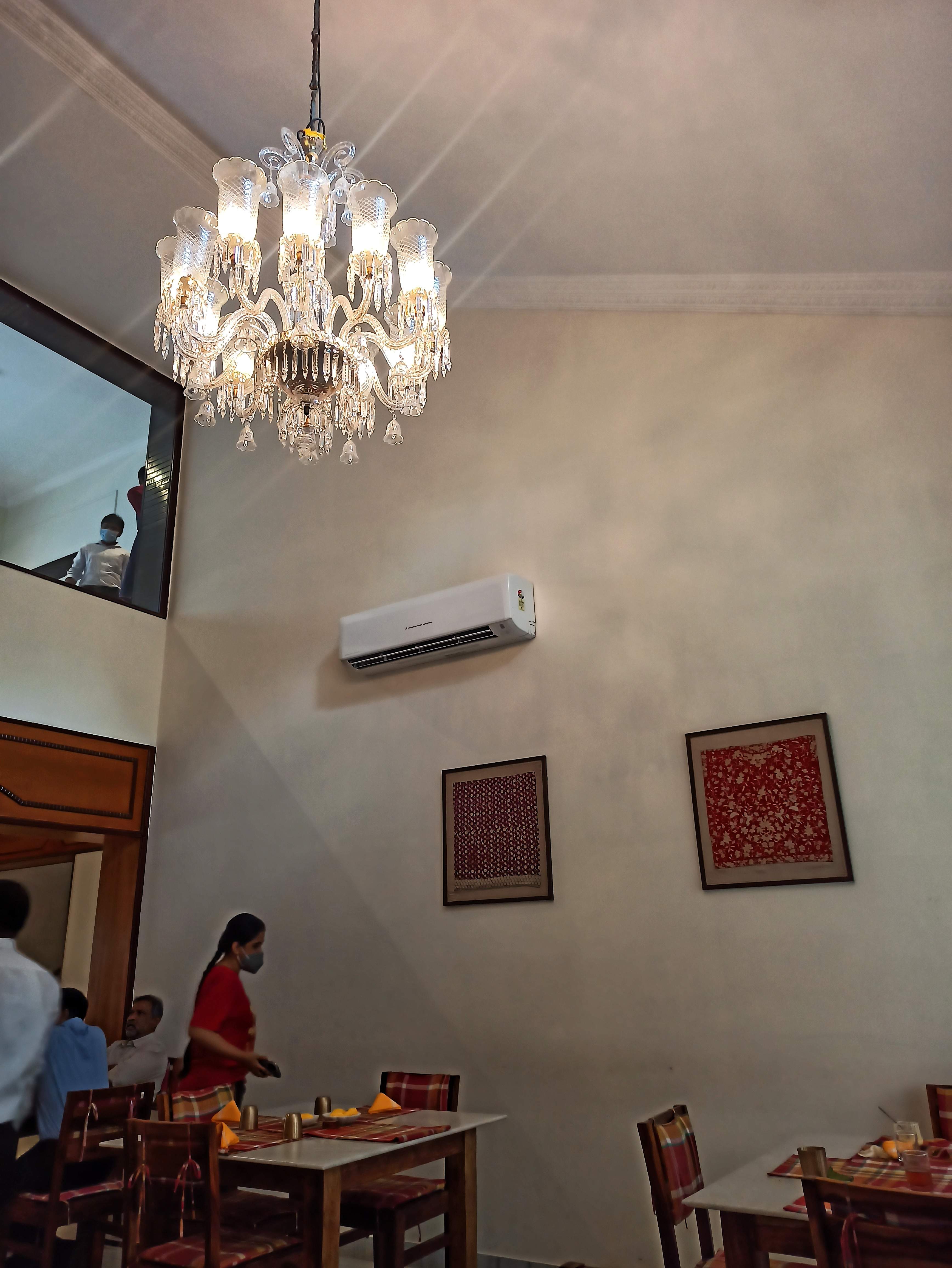 We ordered but before the meals arrived we were joined by Gaurang himself at the table. We asked him why he was thinking of venturing into food after fashion and he replied, “Like fashion, the food I explore at Gaurang’s Kitchen is also designed. Every day we have a new menu that brings a version of mini India to a plate. Delicacies are served to pay homage to the place of origin, authentic flavors, local ingredients and more. Much like the loom, I aim to revive forgotten recipes our ancestors used to make. 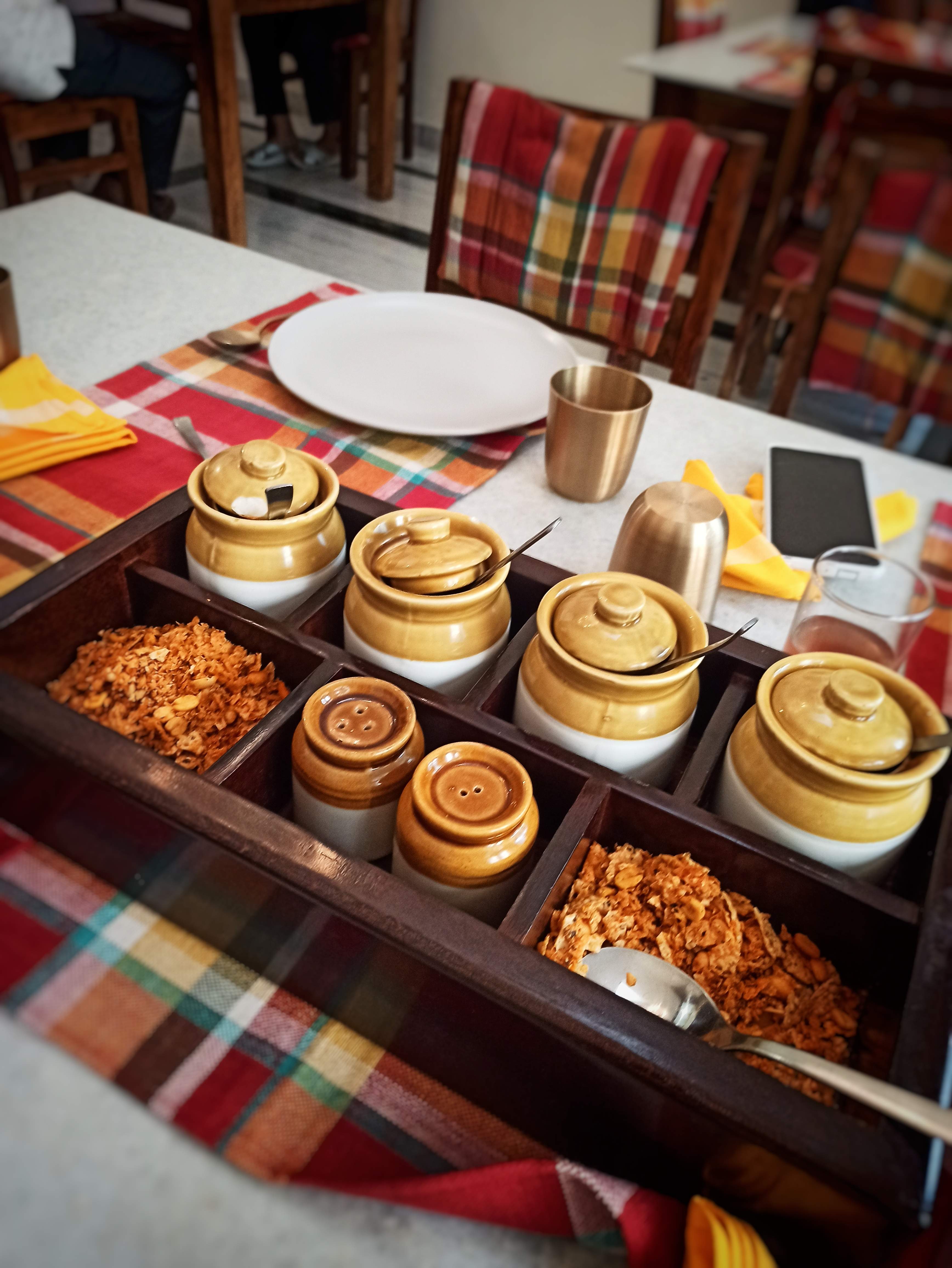 As he tells it, the entries of the festival are served. This has mysore bonda, usual cobblestone, patra and sabudana vada served on a wooden plate. We ate the fries sabudana vada dipped in creamy curd which made for a delicious snack. The Mysore Bonda and usual cobblestone tasted delicious with a subtle tasting sauce. The Patras was a unique snack we tasted. Made with colocasia leaves rolled in chickpea flour, it had a sweet, tart flavor that perfectly charged our taste buds and prepared them for the main course!

As we finished the starters, the eclectic main cause arrived. There was an assortment of items presented grandly in a Kansas thali. The breads like puri, chapati, puran poli, thalipeeth and tandlachi bhakri were at the center while salads, sauces, vegetables, curds and sweet dishes were collected in small kansa bowls. The thali looked luxurious and tasted authentic and promising.

It had a mixture of colors- rich yellow of katachi amti daldark orange sauce paneer kolhapuridark brown beet poriyalwhite of shrikhandgreen of hirvi bhaji and more.

We started with the predictable paneer kolhapuri which surprised us with its less spicy flavor which made it more delicious. We loved the sukki batata bhaji which had fried potato chips topped with cilantro leaves. It stood out for its tasty burst of spices like cumin and mustard seeds. The beet poriyal was more like a salad that added a crunch to dishes with sauce. After a sauce and fried vegetables, we swallowed the katachi amti dal and moongdal khichadi. They balanced the most savory and savory dishes with their simple taste reminding us of the essence of homemade dishes.

Satisfying our sweet tooth, we continued the puran polite. The semi-fried flatbread was stuffed with a mixture of ground legumes, sugar and batter. It was topped with ghee and melted in your mouth in a jiffy, making us feel lighter even after the thick stuffings. The payasam and ukadiche modak were equally delicious. The by payasam the sweetness was on a higher note but it was well balanced with the creamy yogurt sweet dish of srikhand topped with crushed pistachios.

With such a wholesome thali rich in texture and variety, we were truly reminded of the flavors of Maharashtra, Telangana, Karnataka, Gujarat and more lovingly served for the festivities