Design curator and writer Corinne Mynatt became fascinated with objects she found at flea markets and began researching their history and function. She takes us into her new compendium, “Tools for food: objects that influence how and what we eatto discuss the shapes, ingenuity, and overlaps of kitchen utensils across time and culture.

The following interview has been edited for length and clarity.

KCRW: What sparked your obsession with cookware?

Corinee Mynatt: It probably would have started with my background in art and design. I started out as an artist, then eventually became a designer. And when I quit my job a few years ago, I wondered what was the one thing that was obsessing me that was going to take me through the next phase of my career. And I remembered finding… these incredible items… at flea markets in Paris, Tokyo and Berlin, and [having] such a curiosity about the beauty of these objects, their shape, but also who made them, when, why, what was happening at that time. And so it was this kind of design aspect of these objects that fascinated me. And when I looked for a guide or reference on this aspect of these objects, there was none. Maybe from an antiques perspective or something, but not a design survey. And that’s how I started my journey.

Going through the book, it’s fascinating how so many different categories of tools have changed over time.

Exactly…I’m sitting here looking at the pages with peelers, and there’s a Chinese peeler, which is some form, the REX peeler from Switzerland, and then the Good Grips peeler which was modified and created in the 20th century . And the function remains the same for many things, but is created by different cultures in different ways.

Another thing I like about this book is that it looks at these similar objects. So, for example, the mortar and pestle. In South America, it is used to grind masa and corn, and in Italy, for pesto. And the larger wooden ones are used in Africa and East Asia for pounding rice or grain. We use so many of the same items around the world, but for different foods and for different purposes. And that’s one of the most exciting things that I love about this book.

Kitchen items are used across the world for different purposes and with a variety of foods, although the designs have remained the same over the centuries. Photo courtesy of Hardie Grant.

In the chapter on steaming, there’s a Japanese bamboo steamer that could literally be a piece of art hanging on the wall. Could you talk about this one?

the shikizaru, as you say, is a work of art in itself. It looks like a very delicate basket. It is reminiscent of wicker chair bottoms and exquisitely crafted 18th century chairs around the world. And this object also speaks to me a lot about Japanese cuisine and its extraordinary, but also about the know-how so present in Japanese kitchen utensils [and] also through their culture. This object is particularly used to steam delicate foods, such as conger eel, or other delicate fish requiring delicate treatment. And the object is also only used about twenty times because it is so delicate. It is exquisite to look at. I have it in my kitchen and haven’t used it yet because it looks so good, but I love looking at it.

Talk about the indian boti, featured in the cut and chop section of the book.

The boti is a curved knife, usually mounted on a piece of wood so that it can be used on the table or on the ground. I like this object because it’s the opposite of how we think about cutting things. Instead of using your knife to press down on an object to cut it, the object – like a squash, or a cucumber, or whatever – is pressed down on the knife. So the curve is kind of facing you, and you’re pressing the food on it to slice it, which you can do very, very quickly. And then the slices of food fall below. I love that it’s such a contrast to how we think about how we’re going to reduce food. It’s just another way of doing it. And it shows how different people have invented different things all over the world for thousands of years. 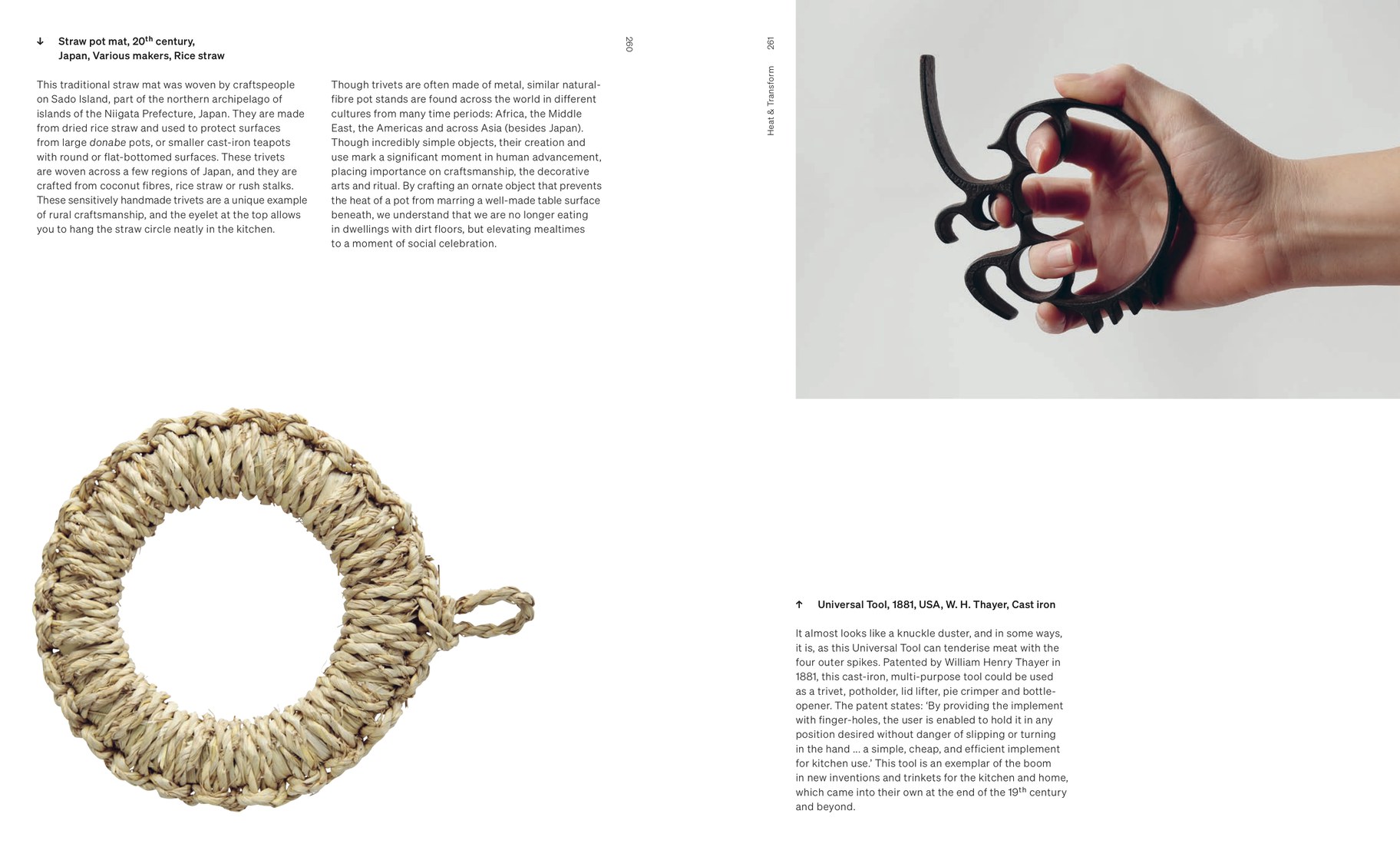 Design curator Corinne Mynatt calls Thayer’s universal tool (right) her favorite discovery. Made in the USA in the 19th century, it served a variety of functions, including a meat tenderizer, lid lifter, and trivet. Photo courtesy of Hardie Grant.

What are some of your favorite tools from the very beginning of industrialization?

I’m going to touch on when things like this started popping up in the late 19th century, because that time it was just a flurry of invention. And the one I want to talk about is the one on the back of the book. It dates from 1881. It is called Thayer’s universal tool. It is cast iron and was made in the USA. It looks like a brass knuckles, but actually has a few different functions. It is a meat tenderizer, a pot lifter, a lid lifter, a trivet. There are plenty of other things I’m sure you can take care of if you had it in your hands. But it’s just a very strange object and a real anomaly of that time. And it was certainly an interesting discovery to make in my research that really stuck with me.

Perhaps my favorite entry in the book, because it’s so random, is the hanger.

I think for most Americans, that hanger is kind of part of growing up, camping outdoors when you’re younger. And it is a tool for food. Don’t forget that. There are little moments like this of ingenuity, where not only was it ingenious to invent the coat hanger and all that already, but then for someone else to turn it into a marshmallow roaster, it is just fantastic. It’s so simple, and it brings up such fond memories for so many people. 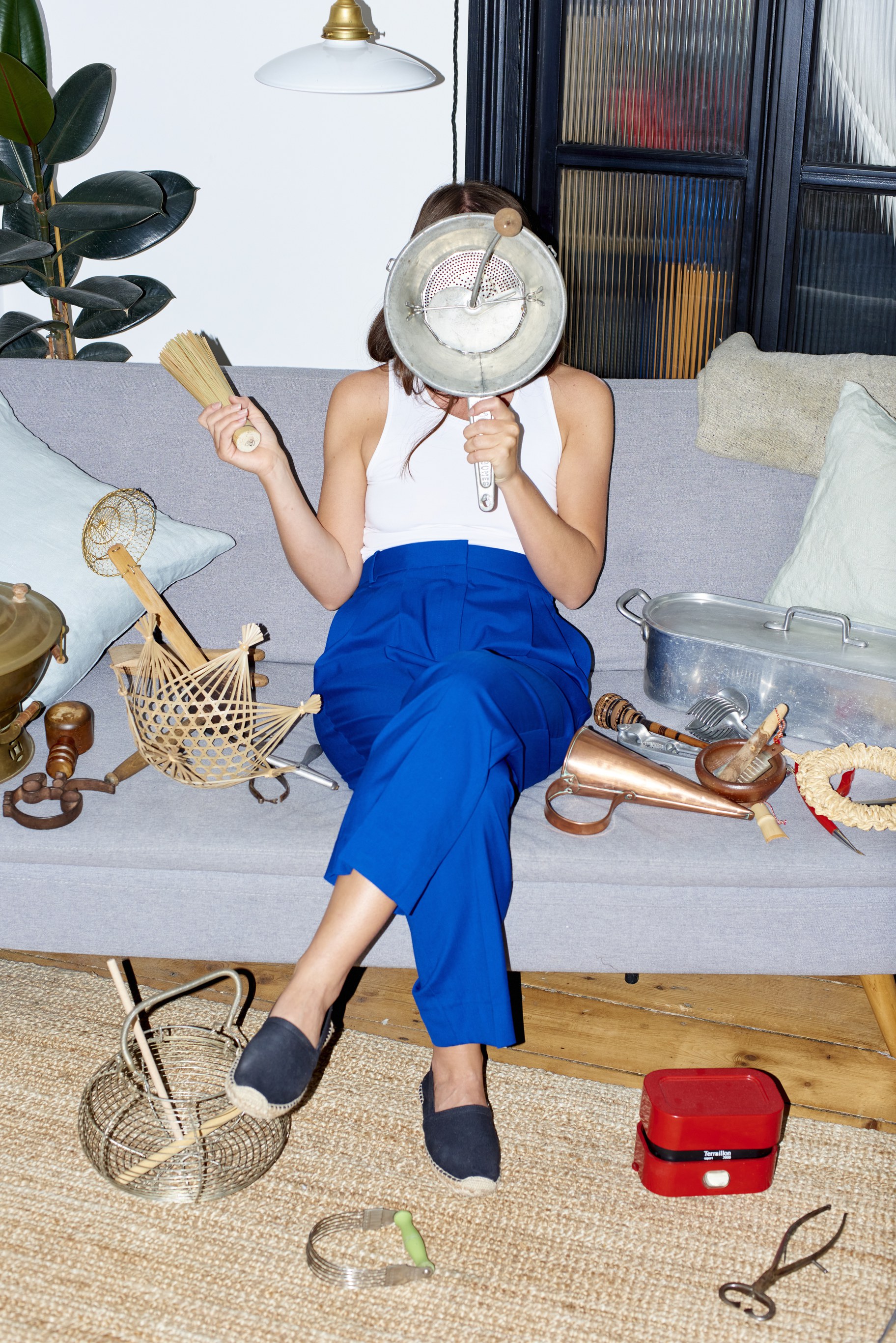 Trained in art and design, Corinne Mynatt is interested in objects that fascinate her that she finds in flea markets in Paris, Tokyo and Berlin. Photo by Flora Maclean.

Tell us about the Tala Indian curry measure.

It’s funny because they actually made it in the UK and Germany, that sort of basic measure that was only used for cooking or maybe for other purposes like sauce. The original one was [for] very basic and standard foods. And then the curry measure was created in the early 2000s.

Can you describe the shape, because here in America we don’t use measurement objects of this shape?

It is a conical shape that has a base for it to sit on the table. And inside are the different measurements. So there are, I think, nine different recipes you can use the cone for, with lines that measure how much you should have of each thing. So for rice, you put the rice up to a line, then you put the water up to a line. Then there’s one for the chicken jalfrezi, and it tells you how many tomatoes to put in and the spices and the chicken. And then for chapati, which is a flatbread that you eat with curries, how much wholemeal flour and water and that kind of stuff to put in. So it’s all there. It’s a bit like a Pyrex jug, but it tells you the ingredients to put in to be able to cook curries.